At this point in the semester I introduce myself to the students in the Engineering courses with the title Creativity, Innovation and Vision.  There is both an undergraduate (ENG333) and a graduate version of this course (ENG598).

The originator of the course is Dr. Bruce Litchfield. Students in these courses learn that their own state of creativity is not as static as they might expect. Bruce and his collaborators also do research on creativity enhancement; paying special attention to the ways in which engineering students currently incorporate creativity, since it has been shown that for engineering students creativity does not increase as they move through their college courses (the same is likely to be true for students in other disciplines).(1)

The descriptions for the CIV courses are:

“Personal creativity enhancement via exploration of the nature of creativity, how creativity works, and how to envision what others may not. Practice of techniques and processes to enhance personal and group creativity and to nurture a creative lifestyle. Application to a major term project providing the opportunity to move an idea, product, process or service from vision to reality.” (2)

The courses are quite popular with students from all over campus, not just Engineering.  Many of the students who take the graduate level course become teaching assistants for the undergraduate course in subsequent semesters. (I think in this case the term ‘facilitators’ instead of TA is more applicable)

Over the last ~3 years I have worked with Bruce and the TAs on a module we call BioI.  It is basically a module on BioInspiration or Biomimicry. . [Note: in 2014 we realized that the term Biocreativity created too much confusion and we decided to name this module BioI or BioInspiration].

The BioInspiration module is divided into four class meetings [Note: in 2014 we also decide to condense the module since students felt they were not able to focus on this one task if they had all these other topics being thrown at them too.]  This week I met the students of two ENG333 sections. This semester a large majority of students are engineers (mechanical, chemical, civil, electrical, bioengineering). A number of students are computer science majors, and advertising majors. A couple of students are majoring in the arts, such as creative writing and graphic design. Students from the humanities are also represented, by majors in philosophy and anthropology. In other words, it is quite a diverse group of students eager to learn how to enhance their creativity.

During our first meeting this past week I introduced the students to the topic of Biocreativity.  I mostly talked unscripted, but I also had a pretty PowerPoint behind me with amazing pictures by Alex Wild (http://www.alexanderwild.com/). [Note: in 2014 the course will have 7 or more sections. Too many for me to visit. We have decided to therefore put this first lecture on video which will be presented to the students during the class.] 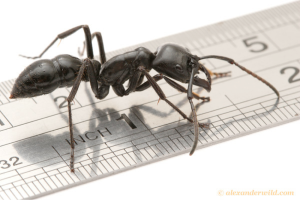 Avenues to becoming BioInspired (as a student in CIV)

1. Delve into biomimicry and bioinspiration basics

Students were asked watch two videos before the next BioCreativity meeting.

2. Delve into biomimicry and bioinspiration history

Students are encouraged to review some “famous” examples of bioinspired design.

Some general articles that introduce the topic:

Non-insect Top 10 (These are the most famous examples, I do not agree that all of these are in fact bioinspired or have been successful*):

Insect Top 10: I will cover all of these examples in detail in this blog.

Change your surroundings and go outside into nature

Here are some resources for when you go out into nature:

Go inside to view nature

Leonardo Da Vinci’s sketch of a bird in flight.
http://commons.wikimedia.org/wiki/Leonardo_da_Vinci

See what others are doing

Find inspiration on the web (look at great pictures of nature, read great stories about biology).

Go to the bookstore or library 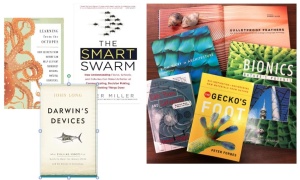 Bioinspiraton and Biomimicry book covers from my eReader and at my lab.

And then I sent the students off into the world, to get inspired. Actually, I explained a little bit more about the project we want them to do, but I will leave those details until the next blog post about BioCreativity.

@Cotesia1 Thanks for talking to my class today! That invention where buildings get clean when it rains blew my mind

@mattisnice You are welcome! If you google "lotus effect" & "lotusan" you will find more info. #bioinspiration #biomimicry

(1)  This research by Burgon, et al. (under review) measured the creativity of first- and fourth-year engineering students using two nationally-normed creativity assessment instruments. I will blog more about this work when it has been published.

(2) More information about the Creativity, Innovation and Vision courses:

Two videos that introduce the topics discussed in the courses can be seen here:

And here is a pdf of  the First Day Course Pack.