People at the University of Illinois at Urbana-Champaign often make a distinction between “Those North of Green Street” and “Those South of Green Street”.  In a town that is almost perfectly arranged as a square grid, Green Street runs through the campus, connecting downtown Urbana to Campus town and to downtown Champaign. 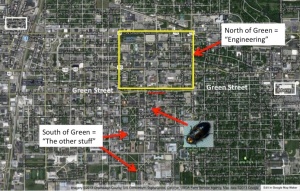 Google Map of the UIUC campus

This (for the record: incorrect) image is not really helped by the fact that Green Street is quite a dangerous street to cross. Unless you have courses on the other side, why would you risk your life? Quite a few students rarely have to make this choice during their 4+ years on campus. However, I try to do my part to make students experience life on the other side of Green Street. Students from different disciplines benefit from interactions. And, Hello!, the same goes for faculty and staff.

Last week I made students risk their lives and cross Green Street, just so I could change their future by having them touch some cockroaches. I am happy to report that all students (mostly engineers from North of Green), who are enrolled in the ENG333 course, arrived safely at my lab (located South of Green), and that there might be at least a few students out of about 40 who enjoyed the experience.

For the “field trip” my graduate student Gwyn Puckett and I had transformed the lab into an insect petting zoo complete with cool displays. During the sessions (4 different sets of students visited us in 45 minute intervals) we also had help from Adrian Smith. Adrian is a Postdoc in the Suarez-lab here at Illinois and he has an extensive background in biomimicry. 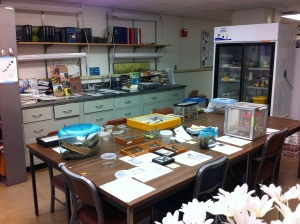 This semester the displays were kind of heavy on the cockroaches because of the 15 or so different species that would make an appearance at the 30th Insect Fear Film Festival to be held a few days later. But we also had live ants, flies, lubber grasshoppers, etc.

The goal of the “field trip to the Alleyne lab” is to get students to look at insects in a way they have never looked at, or touched, them before. I try not to talk for the full 45 minutes, I encourage students to ask questions and thus to guide the discussion, but I do some talking and I try to cover at least 2 or 3 of the 6 topics outlined below. In the future I will cover these topics in more detail here on the blog. I leave this detail out for this field trip since I want the students to be guiding the creative process (remember, the course is called Creativity, Innovation and Vision). 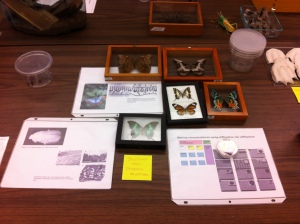 Many butterflies and beetles have nanostructures that give their wings and bodies iridescent structural colors. I made this Prezi presentation a few years ago. The information is basically what I explained to the students visiting the lab.

Bioinspired robots have become quite popular over the past few decades. The most famous examples are the robots that were inspired by cockroaches (again, I will blog more about this in the future). Engineers realized that the stability of the roaches due to their tripod gait, and their ability to go rather fast over many different types of terrains were all characteristics that would serve robots well.

This short video shows both the tripod gait, the stability and the quickness of the Madagascar hissing cockroaches (Gromphadorhina portentosa). (The tweet itself shows one should not tweet while exhausted – I couldn’t type strate 😉 )

Roaches are also good at going around, over and under stuff. http://t.co/E1fj8eMyx0

I also pointed out the many “simple” yet elegant sensors that insects use to get around in their environment, and to taste stuff, and to find each other. This is easy to see in the cockroaches (see video in previous section) as they try to navigate obstacles – they use their antennae, for instance. I also encouraged the students to hold a lubber grasshopper and to point out some of the sensors that are easily visible (compound eyes, antennae, sensors on mouthparts), and then told them of the ones that are not so obvious (mechanoreceptors, for instance).

Gwyn and I discussed the live Manduca sexta (tomato hornworms) and pointed out the different types of cuticle an individual makes during its lifetime. The cuticle is made up primarily of chitin and protein, is build “from the ground up” in an hierarchical manner, and large parts of it get recycled at each molt. In the picture below the caterpillar on the left will initiate pupation in a few days and then eventually turn into a pupa like the one on the right. The caterpillar’s cuticle is soft and bendable, the pupa’s is hard and tough. 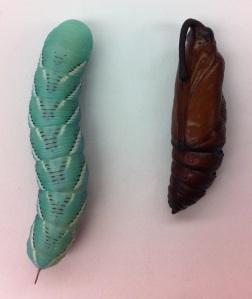 There is always so much to discuss when it comes to social insects, so we usually have the students just ask questions. In the past I have shown students leaf-cutter ants. 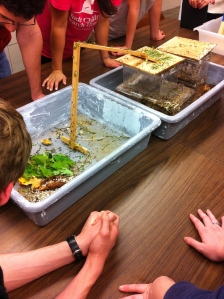 Leaf-cutter ant colony observed by ENG333 students (in 2011). It is always interesting to watch emergent behavior get things accomplished – in this case getting leaf material from the tray in the foreground into the nest located in the tray which is in the background.

This year Adrian told the students about a local carpenter ant species, Camponotus pennsylvanicus, and (my favorite) trap-jaw ants. This semester the trap-jaw ant species was Odontomachus rixosus, a species collected in Cambodia. 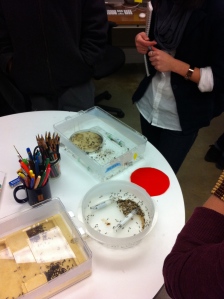 As a bonus, Adrian also brought in a zinc nest cast of  Messor pergandei (an harvester ant from Arizona). 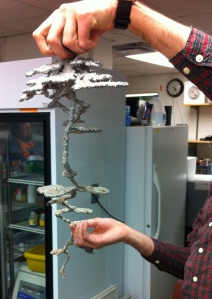 Zinc cast of an harvester ant species, Messor pergandei, that always makes nests that run down at an angle. Most other species have nests that go straight down. This only about 1/2 of the complete size of the nest. 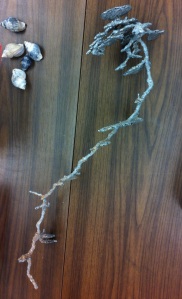 Of course, we always have to show the videos of trap-jaw ants jumping “with their mouth”, and then crashing back to earth – and surviving. I tried to make the students think about the amount of force a small animal can generate with the right muscle and cuticle, and that it is amazing that the cuticle does not shatter upon impact.

Other live insects that made an appearance were: 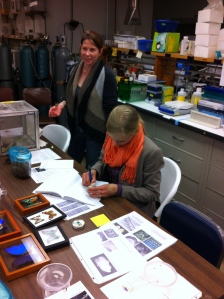 Some things I would like to do differently next time.

1. Prepare some questions that students have to fill out before they come on the field trip. I would ask them questions about what they know about biomimicry and bioinspiration, and about the videos they were supposed to watch.

2. While in the lab some students took to the project/process easily and did exactly what I wanted them to do: ask questions, take notes, make sketches. To help others get “jump-started” I might also come up with a worksheet that encourages students to Science Scribe the whole adventure. This may require clipboards and thus a trip to to the office supply store. YEAH! 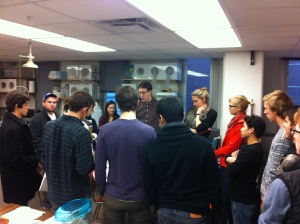 Adrian talking to one group of students about ants.

All and all, it was a fun afternoon. I think we made a few students think about:

I owe a special thanks to Gwyn Puckett, Adrian Smith and the ENG333 TAs for helping out with the fieldtrip!

Note: the picture of the lubber grasshopper was shot with an iPhone by Alexander Wild. Find out how he did it here.

2 thoughts on “Field Trip to the Alleyne Lab”