And here it is. Behold the best blog-banner ever – created by Nils Cordes*!

Of course, the premiere of such a great banner also requires a blog post that explains it. So let me try.

The animal featured in this blog’s banner is a springtail from the hexapod lineage Collembola. Collembola are not insects but entomologists are an inclusive bunch so we gladly incorporate spiders and entognathous creatures into our studies and teachings.

Springtails are very likely the most abundant arthropods on earth. They occur in the soil (different species at different depths), in leaf litter, moss, under logs, etc. One of the most distinguishing features, if you can consider anything on an animal that is only 0.12 to 17 mm long distinguishing, is the forked furca at the posterior end of the animal. The furca is present in a lot of species, but not all. Those that live deeper in the soil usually lack the structure because they do not need it since its main function is for jumping. 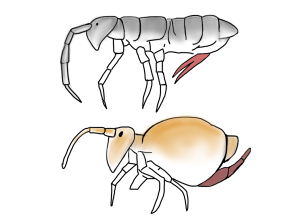 Generalized “elongate” (top) and “globular” (bottom) Collembola. Furca (springing mechanism) in red – the springtail at the top has the mechanism partly retracted and the springtail in the bottom picture has the furca extended. (Marianne Alleyne)

Collembola species can have varying body shapes, but generally there are those with elongated bodies and those with more globular bodies. Collembola can walk, run and climb, but the locomotory specialty that they are best known for (and which seems to be rather ancestral) is jumping. 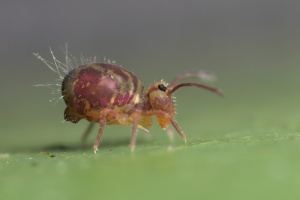 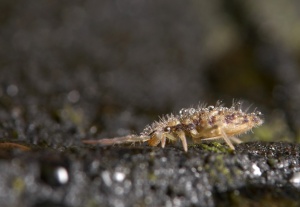 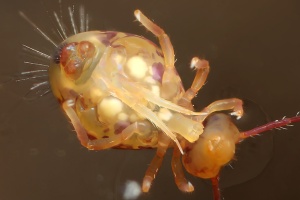 This excellent picture is of a springtail’s underbelly. The picture was taken by Lord V as a springtail walked over a glass slide. Clearly visible is the forked furca that can propel the animal into the air. (Used with permission.)

Collembola can jump multiple times in a row, those with globular bodies and more advanced tracheal systems more often (1). In general, springtails tire easily so that jumping is usually only used as an escape mechanism. The jump can take the animal in any direction. Since the furca is located at the extremity of the body, directly beneath the center of gravity, the dynamics of the jump cause the body to rotate head over end. Some Collembola species can jump very high, others take a shallower trajectory but land far away from point of takeoff.

This jumping escape response is quite successful but it does require modifications of the entire body plan. The cuticle, the (hydrostatic) endoskeleton, tendons, and muscles all work together to manipulate the body in such a way that the propulsion is optimal.  How exactly this happens is not very well understood, yet this system holds inspirational lessons for passively compliant locomotory structures.

At rest the furca is held within a ventral groove of the abdomen. At the time of the jump the furca moves from this resting (retracted) position to the extended position. Based on morphological and kinematic observations (there is no direct experimental evidence) it appears that as the furca moves it compresses a “spring”. After it passes a critical point of extension the spring releases all the energy, which in turn causes the springing organ to snap out at high speed. If this happens as the springing organ hits a substrate a force is created that propels the animal upward. 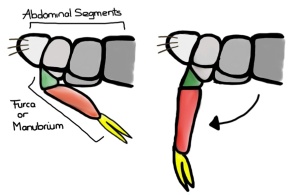 What exactly comprises this “spring” is not clear. Earliest experiments done by Manton (2) in the early 1970s concluded that to evert the springing organ the body’s hydraulics (pressure on the fluid that makes up most of inside of the body = hemocoel) was important. However, later in the 1970s, Christian (3) concluded that direct muscle action, and not necessarily hydraulics, was the main force inducer. In the 1990s, when high-speed photography had advanced greatly, Brackenbury and Hunt (4) concluded from their experiments that hydraulic forces created by pressurizing the hemocoel increases tension on abdominal sclerites (the exoskeletal plates) that results in a click mechanism that propels the animal into the air. All these studies do agree that elastic elements within the base of the springing organ and within the exoskeleton, as well as the body as whole, are important too. To what extent is not known. 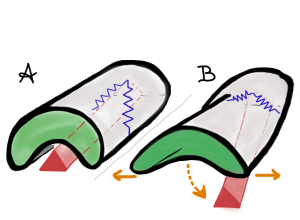 Click mechanism model of the furca (red) and distal end of abdomen. The furca, at rest, is retracted into an abdominal ventral groove. A pair of “basal rods” (springs, in blue) are embedded in ventral and lateral parts of the abdominal sclerites 4 & 5, these springs also attach to the apex of the furca. The spring/click mechanism gets help from muscle and active dorsiflexion of the body (in orange), to release the spring organ from the groove. After the furca passes a critical point of extension the spring releases all the energy. (Drawing by Marianne Alleyne based on Brackenbury & Hunt, 1993)

Imagine a beam or a chopstick that’s flexible transversally but somewhat stiff longitudinally. If you compress it, it doesn’t change…up to a point. Then it ‘snaps’ out and buckles. You get a rapid displacement as all the strain energy is released. The exoskeleton of the springtail does a similar thing. It stores the strain energy and then goes through a snap-through buckling phenomenon to produce large strain motion which is then amplified by the tail and presto…springtail in motion.

Many insects, and other animals, use musculoskeletal springs that are incorporated into the complete body plan.  These springs help achieve a high rate of acceleration, or a further jumping distance, and help save metabolic energy. Based on these findings compliant structures and materials have been incorporated into bioinspired legged robots (5). Compliant legged robots achieve a few important things: increased energy efficiency, increased speed, ability to avoid obstacles (in case of jumping robots), and the ability to use more simplified controls to enable enhanced gait control and shock absorption. Springs in bioinspired robots have used elements such as airsprings (e.g. compressed air) and compliant materials, but improvement is still possible. Airsprings, for instance, are not very efficient because they end up converting much of the energy they store into heat. In addition, some of the compliant materials are better than others. Rubbery materials, like elastomers, tend to have a fair bit of viscosity in them and so some (maybe lots) of the energy that it stores is lost to heat as well. For high efficiency, most robotic-type systems currently use mechanical springs (i.e. metals). Bioinspired robots also incorporate series elastic actuators that have linear springs intentionally placed in series between the motor and actuator output, which results in the actuator being bulky.

The variety of jumping mechanisms among insects is great (think: click beetle, flea, grasshoppers, treehoppers, etc.). The intriguing aspect of the jumping mechanism in springtails is that it operates so efficiently at a very small scale, much smaller than any bioinspired robot that has been developed. In the future we will be able to manufacture almost microscopic devices incorporating different characteristics into small structures using “springs” and compliant materials.

Maybe we can incorporate locomotory mechanisms that propel the object, using very little energy. Inspiration for what materials to use and how to construct the object can be found through further study of the springtail’s click mechanism. Somewhat surprisingly not much research has been published on this system since the 1990s. Yet with help from today’s high-speed cameras and microscopy techniques we should be better able to understand how the springtail propels itself. Advanced computer aided engineering (CAE) tools, like finite element analysis (FEA), could be used to augment the visual data and elicit some fundamental internal characteristics that are not visibly detectable.

By researching this topic I thought of a few applications for technologies based on the Collembola’s spring mechanisms. Click mechanisms at the scale of a springtail’s springing mechanism could possibly aid stent design or inspire development of other deployable structures that snap open or closed based on certain environmental conditions. Maybe small springing mechanisms can be incorporated in groups and serve as strain sensors on bigger structures. And who wouldn’t welcome millimeter-sized robots that can perform in a futuristic “flea circus”?

*My friends can attest to the fact that I have been talking for a long, long time about starting a blog about how we can use insects to inspire new technologies. One of these friends who had to humor me for so long is Nils Cordes. I met Nils when he was a student at Illinois, but he is currently finishing up his PhD at the University of Bielefeld in Germany. Nils is a great scientist, and a great communicator. He is also a wonderful artist. He offered, those many years ago, to create some art work for this (then still imaginary) blog that I was going to use to communicate my love of insects. And he did…behold the best blog banner EVAH!