This post is not about Bioinspiration. Instead it is about the “service” part of my job. Read the post if you are interested in the Entomological Society of America, otherwise please stay tuned. Another bioinspiration-related post will be posted soon. There is a plea for symposia-ideas for the International Congress of Entomology in 2016 related to Insect Bioinspiration and Insect Biomechanics at end of this post.

I really love my primary professional society. I have been a member of the Entomological Society of America for almost 20 years now, and I have seen it go through changes – most of these changes resulting in a more inclusive and vibrant Society. Ever since my student-days I have tried to be involved within the leadership of the society; as Section leader of my section (first called Section B-> then the poorly named IPMIS-> and now PBT, Physiology, Biochemistry and Toxicology) and currently as a member of the Program Committee for the Annual Meetings.

How does one get to organize the arguably premier entomological conference? Hum, well, what happened was that my PhD advisor, Robert N. Wiedenmann, was elected president of the Society a few years back. I greatly admire Rob, he is one of my favorite people, so I may have, inadvertently, told him that I would do anything to help him make his term successful. Guess who called me back a few weeks later to ask me to serve as one of “his” Program Committee Co-Chairs for the Annual Meetings in Austin in 2013? Of course I said yes, also because the other co-chair Luis Cañas (the Ohio State University) has been a long-time friend. We were going to give the Society an international flair – with Central-American-Western-European-Midwestern sensibilities.

What does it mean to be on the Program Committee? Well, it is basically a 3-year commitment.

The first year you sit in on bi-weekly conference calls and you listen to the current Program co-chairs organize “their” meeting. You take LOTS of notes, and you try to ignore the increasing panic becoming obvious in their voices. During that first year you are also in charge of organizing the Student Competition, which means that at the summer meeting (held at the site for the Annual Meeting) you start badgering the Section Leadership (president and vice president) for names of moderators and judges, and try to figure out where the heck you are going to put all the sessions. No matter how organized you are, how supportive the ESA staff, the week before the Annual Meeting you are going to have missing judges – so this is where you start calling in favors and shaming people to “volunteer”. (This issue is worth a whole different post, and upon reflection this was my least favorite part of my term on the Program Committee). By the way this is where you sign up to volunteer for ESA.

The second year you get to put the program together.

To organize all the symposia I went back to basics and used sticky notes. Top left shows me dividing up the P-IE, and bottom right shows my son entering info into ConFex. 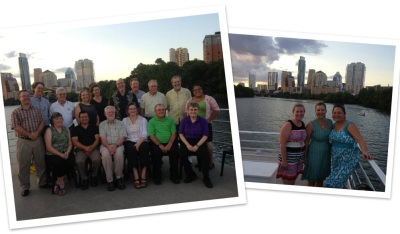 Entos, you’ll be sad to learn that when submitting to conferences many of us misspell research animal’s names. Making Progr Chairs curse.

Penultimate #entsoc13 Program Comm conf call: Member excitemt high, but @luisca511 & I have feeling of “I think I’m forgetting something”.

OH on #entsoc13 Program Committee conference call: “This will be the most awesome conference on the planet!!” #RomanoRules

And then, the meeting just starts, happens, and ends. And all the while you just bask in the glow, because the ESA staff has everything under control.

The awesome ESA staff. They make the meeting run smoothly.

The third year you that you serve on the Program committee you still attend the conference calls, the summer meeting, and you are in charge of the Poster sessions. But your primary purpose is to serve as a wise sage to the new Program Committee Chairs and Student Competition Chairs. A lot less work is involved, and you get to go more sessions, talks and posters at the Annual Meeting. Or at least that is what I think you do, guess I will find out next year.

As you might have heard by now the meetings were a big success. We had a record registration of almost 3500 entomologists, we had a record number of symposia and talks. Some of the things I am most proud of that we accomplished:

It is important that we “do the right thing,” looking out for each other and ourselves and, importantly, holding each other and ourselves accountable. As a professional society, we need to have clear policies, and we must be willing to act when ethical transgressions are found. Not necessarily to act swiftly, but to act fairly and boldly. –  R.N. Wiedenmann, President of the Entomological Society of America

Harassment of ESA participants of Entomology 2013 will not be tolerated in any form. Harassment includes offensive verbal comments related to ethnicity, religion, disability, physical appearance, gender, or sexual orientation in public spaces, deliberate intimidation, stalking, following, harassing photography or recording, sustained disruption of talks or other events, inappropriate physical contact, and unwelcome attention. Participants asked to stop any harassing behavior are expected to comply immediately. Retrieved from the http://entsoc.org/entomology2013 website.

Things I hope to help improve:

Serving on the Program Committee is a big commitment. It requires time away from your academic job, from family, and it costs money since you are committed to pay registration and travel and hotel to all three Annual Meetings. No, “I think I’ll skip this year and send my grad student”. (NB: travel to summer meetings and hotel are paid for by ESA)

I am glad that I was able to serve the Society as Program committee co-chair. I learned a lot, especially about the Society itself. The Entomological Society of America has many members, all from different backgrounds and with different reasons for why they are members and why they attend Annual Meetings. I myself often feel different from my entomology colleagues because of my non-traditional job description and my research & teaching interests, but being this involved in the ESA’s functioning always makes me realize that none of us really fits in a neat box – thank goodness! After almost 125 years the Society is strong and yet not content with the status quo. And because I am a glutton for punishment, I am also involved in the Program Committee for the 2016 International Congress of Entomology to be held in Orlando. (Please consider submitting symposia topics on Insect Bioinspiration and Insect Biomechanics – contact me!).

And then there were these reasons:

2 of my fave men/entos on left MT @EntsocAmerica: Thx Marianne A, Luis C & Rob W for making #EntSoc13 such a success pic.twitter.com/vDuv8RNb0k”

Below are my archived tweets from the Common Names & Program Book Index saga. I love how you can just see that I get pissier and pissier over the course of a few months.

Entos, you’ll be sad to learn that when submitting to conferences many of us misspell research animal’s names. Making Progr Chairs curse.

Also, it would help if you did not make up your own common names. “Stinker” is not an ESA approved CN for the brown marmorated stink bug.

@Cotesia1 But to be fair BMSB is the worst common name ever.

Also, if you submitted “Secondary screwworm = Solenopsis invicta” then I’m SURE you did not dbl check submission #mytimewasted = #grumpyme

Reconciling 30 diff subm of “pea aphid” into 1 for common names index took me freakin 30min. People! I even know that’s not Coccinellidae!

Example of what we r dealing with. & this one had an automatic entry menu! They all should combine into 2-3 entries. pic.twitter.com/QY8TZg2Gfs

Good thing I can’t see easily who submitted what. But if you can’t get the Family right for the ant you study then “here is your sign”.

@cbahlai @davidjayharris @skmorgane + solutn: Don’t be so darn sloppy & use common sense when submitting work that world will c #crankypants

Time to acquaint myself w/ “Rules of Alphabetic filing”. This is why I have a PhD in Entomology. NOT! #HappyLaborDay. http://t.co/zbB4dEBvMn

Yeah, I think @luisca511, R.Romano & I are done with #entsoc13 Program Book! (So why r ppl now requesting to have their prez days changed?)

Last week I attended the Annual Meetings of the (other) ESA in Austin, TX. Actually, I kinda helped organize that meeting. (More about that in my next post, which will focus on my time on the Program Committee.)

When I first submitted the title for the poster in June I had only just started this blog and I thought it would be a great idea to cover the numerous posts I would have written by November.

Still, it was a great exercise to go through and it helped keep me sane during the weeks leading up to the meeting. 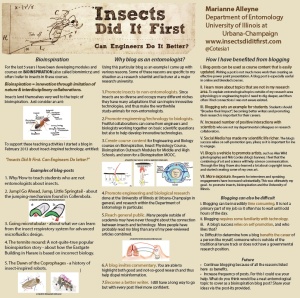 Click here for the pdf version of the poster

Below is a picture of what it looked like at the conference. I was unable to spend much time with it since the official social hour for the poster session was right at the time of various committee meetings (obviously poor planning on the part of the Program Committee). Judging by the bump in views at my blog some people did find it interesting.

As I mention on the poster, social media has enriched my scientific life. One of the best parts of the meeting was therefore to meet, or catch-up, with some of my ento-tweeps. (Bummed that I had to miss the “official” tweetup).

One of my major “accomplishments” as Program Co-Chair was to get ESA to provide these twitter stickers for name-badges:

Did y’all see these? Opposite registration desk. Or stop me bc have extras. #entsoc13 cc @derekhennen pic.twitter.com/AeUFwy60ZM

Even people not at the conference were represented via a Twitter fall (The stream did not always work correctly, something to improve for next year.)

For more details on why twitter (and, in my opinion, other social media outlets) can be useful to entomologists please read @derekhennen‘s take at EntomologyToday.

Any time I need to cheer myself up, I’m going to look at this photo of @CMBuddle and me from #Entsoc13 😀 pic.twitter.com/ogcI5nfsyU