The insect cuticle can have great strength and flexibility, much greater than if it were just made up of stacked sheets of chitin and protein. The cuticle also exhibits energy absorption properties. This is all due to its ingenious structure. It has a complex hierarchical micro-architecture that spans multiple length scales from the nanoscale to the macroscale, which exhibit a remarkable combination of stiffness, ability for crack deflection, low weight and strength. The cuticle’s special self-assembly characteristics, as those of other biological materials, have attracted interest from materials scientists for the development of laminated composite materials and from bioengineers interested in molecular scale self-assembly.

Many biological materials exhibit structural hierarchy, and some have been studied in more detail than insect cuticle: nacre (mother-of-pearl) and bone. There is often hierarchy within hierarchy, at the nano-, micro-, all the way to the meso-level.  Hierarchical structure is primarily due to the outcome of developmental pathways of biological systems that create the material. Having hierarchy within a biological material is intrinsic. The only forces acting during material synthesis are intermolecular, and are thus very weak and work on only a short range.

This can result in very beneficial properties.

Since human-made materials are often made using a top down approach, by forcing structure and shape onto a material, we do not often see structural hierarchies in engineered materials, or only to a limited extend.

Characteristic figure from “Insects Did It 1st” book by Akre, Paulson and Catts. This illustration by E. Paul Catts accompanied the chapter on plywood/cuticle. Plywood is a human-made material that is layered – if not quite in a hierarchical manner.

The mechanical properties of biological materials, such as the insect cuticle, may give insights into the design of more advanced engineered composites.

Strictly speaking the insect’s integument is comprised of the epidermal cell layer (epidermis) and the cuticle. The Integument itself is build upon a basement membrane (basal lamina).

The insect integument. Let’s call this meso-level hierarchy. The integument is comprised of an epidermal cell layer and cuticle, all on top of basement membrane. (Drawing by Marianne Alleyne)

The basement membrane is only 0.5 μm thick and separates the epidermal cells from the circulating hemolymph (=insect blood).  The membrane can some proteins through, and nerves and trachea also penetrate it, but when this membrane gets breached alarm bells go off in the insect’s body. Often an immune response is mounted by blood cells in response to the breach and the epidermal cells will help prepare it.

The epidermis is comprised of living cells arranged in a single layer. The cells can be modified into structures such as dermal glands and sensory receptors.

The cuticle is secreted by the epidermal cells and can be incredibly thin (e.g. larval endoparasitoids) or incredibly thick (e.g. adult rhinoceros beetles). The cuticle is non-living. It lines the external surface of the body as well as the lining of the trachea and the anterior and posterior sections of the alimentary canal and even parts of the reproductive system. This means that often even these structures undergo a re-lining during a molt.

Several horizontal divisions of the cuticle are obvious, when using an electron microscope, giving the cuticle at this micro/meso-level also a hierarchical structure. These divisions came about because the sublayers were produced in a certain sequence. 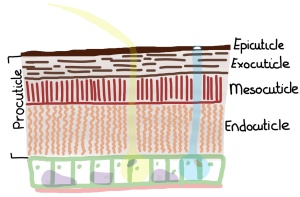 The meso/micro-level hierarchy of the insect integument. The cuticle is comprised of the epicuticle and procuticle. The procuticle is in turn subdivided into the endo-, meso- and exocuticle. (Drawing by Marianne Alleyne)

The cuticle is a composite consisting of chitin fibers within proteinaceous matrix, all arranged in a layered structure. Several horizontal divisions can be observed. Each layer (or lamina) consists of a layer of parallel chitin chains but the laminae are stacked in such a way that the chitin molecules are arranged in an antiparallel manner.

So what does this mean? Lets see if we can build a cuticle graphically from the nano- to micro-scale.

A portion of a chitin chain. In most insect cuticles these chains are arranged in an anti-parallel manner.

Nanofibrils are created when groups of chitin molecules link by way of hydrogen bonds and are wrapped in protein. 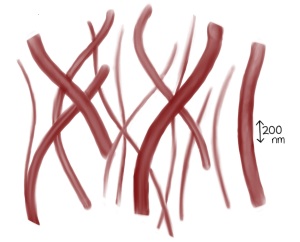 Chitin-protein fibers are woven into a matrix.

The helicoidal stacking of chitin-protein layers (matrix) creates a twisted arrangement. This creates an arching pattern in the cuticle as a whole. (Here layers were created by stacking sushi mats in a twisted manner. Pictures by Marianne Alleyne)

It is the hierarchical structure created at the nano-scale, when chitin molecules link together and form chains in close association with proteins, all the way up to the meso-scale, where different cuticular layers are stacked in non-random orientations, that makes the insect cuticle such an inspiring biological material. It is because of this hierarchical structure that the insect cuticle can take on all the different functions that it has. And ultimately the cuticle is one of the main reasons why insects can be found to be thriving in so many different habitats – air, water, land, even inside horse guts. Modern analysis of small-scale composites and self-assembly-type manufacturing techniques will enable us to make materials equally as versatile as the insect cuticle.

Side note about those sushi mats: